Some agricultural products from Europe are so cheap in Africa that local family farmers are unable to move their goods. Subsidies and our highly industrialised agriculture are to blame. To raise awareness of this issue, we're now importing grain from West Africa to Europe. 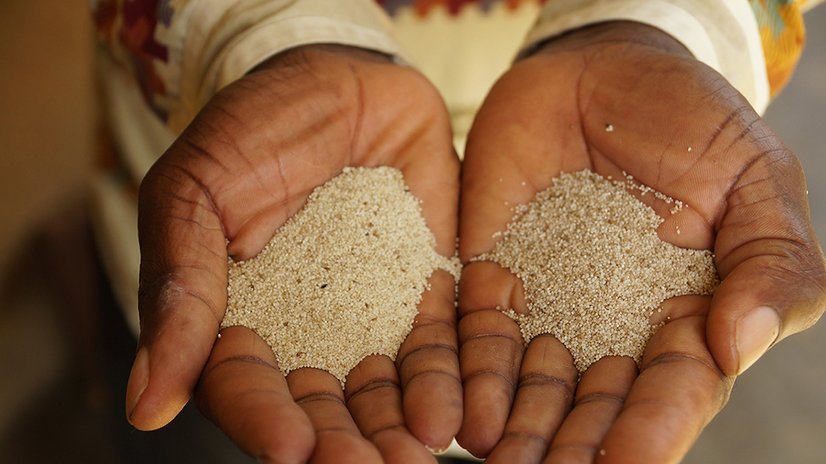 Each year, the EU exports many tonnes of discounted agricultural products to countries in Africa. While it seems to make sense at first, it leaves African producers unable to compete. Their locally grown food is more expensive than products from the EU.

How do EU imports affect the local market?

The EU exports high volumes of agricultural products to African countries. These are mainly foodstuffs such as flour, powdered milk or even chicken. This gives the local people access to a wide range of inexpensive goods.

While it seems to make sense at first, it leaves African producers unable to compete. Their locally grown food is more expensive than products from the EU. This is because the imports come from subsidised, intensive and highly industrialised agriculture. Moreover, there are reduced tariffs on these imports.

On the other hand, agriculture in West Africa is not subsidised at all and is based on small-scale farming structures, with each producer farming extensively on a few hectares of land. And anyone able to produce enough to even consider exporting is deterred by the high tariffs imposed by the EU on imports – up to 25 per cent for grain.

Fonio is an ancient staple food. In botanical terms, fonio is a type of finger millet. The grains of the annual plant are suitable for making couscous and porridge. Fonio can also be ground into flour for use in a variety of baked goods. We'll be publishing recipes regularly throughout our campaign. By the end, you'll be fonio experts!

Fonio is gluten free, rich in protein, and is a source of many B vitamins and minerals such as calcium, iron, copper, zinc and magnesium. The small grains also contain the two essential amino acids methionine and cysteine. This makes it one of the most nutritious grains in the world.

Although fonio is similar to couscous in texture, it has a much richer flavour with a slightly nutty taste. At the same time, the taste of fonio is so subtle that it goes wonderfully with all kinds of sauces and is equally delicious in both savoury and sweet dishes.

In some parts of West Africa, fonio still plays an important role in thanksgiving ceremonies and special occasions.

Fonio is one of the so-called C4 plants. Plants of this species carry out a particularly effective form of photosynthesis. In very simplified terms, the work is shared among various cells in these plants, enabling them to grow even under extreme conditions such as heat and drought.

Family farmers in West Africa have been exploiting this advantage for as long as they can remember. Because of its long history as a crop, an exceptional genetic diversity has emerged without any deliberate breeding.

Fonio has not been a subject of local research. As a result, cultivation methods in the countries of origin are often rudimentary and produce low yields. There is a lack of knowledge about compost and specific breeding techniques. The Research Institute of Organic Agriculture (FiBL), together with SWISSAID and the Alliance for Food Security in Africa plan on changing this by launching a pilot project.

The aim of the project, which will be carried out in Niger, Chad, Tanzania and India, is to make traditional crops like fonio more appealing again, improve the farming techniques of the producers and support the local seed system. The insights gained from this will later be shared with other countries. The project has been running since 2021.

The motivation behind the project is also to harness the potential fonio offers for agroforestry. Like other millet varieties, fonio is also ideal for cultivation in combination with trees such as the Indian jujube. One project in Niger demonstrated that millet yields can be increased by over 40 per cent with this kind of planting system. And the edible fruit from these trees also provided the family farmers with another source of income.

Where does fonio come from?

We source the fonio from the Togolese processing company Bodhi Foods in the city of Niamtougou in eastern Togo. The company works with 814 farming families from 28 cooperatives in 25 villages in the Doufelgou region. Each of the families cultivates an average of 0.8 hectares of land, on which they grow organic fonio.

After harvesting, the fonio is delivered to Bodhi Foods, where the company's employees hull and pack it. Bodhi Foods employs 12 people year-round and another 50 during the harvest season.

In addition to gebana, Bhodi Foods also supplies key customers in the US, where fonio apparently has a stronger foothold than in the European market.

Aren't we taking a staple food away from people?

Trade is the key to improving people's lives in countries like Togo. If farming families didn't export goods, they would only be able to sell their products locally. Since there is too much competition with cheap imports from the EU, they would end up with no income at all and the local grain varieties would disappear over time.

In addition, fonio is a crop that is resistant to hazards such as drought, isn't fussy about soil and grows very quickly – it takes only about 70 days from sowing to harvest. Its robust nature also makes fonio a good candidate for crops that provide income to farming families in times of climate change.

So let's work together to raise awareness of the negative impact of export subsidies and prevent valuable crops like fonio from being forgotten. Order now!

Europe needs to change its trade and agricultural policies. Fundamentally and for the long term. The reason why this change is urgently needed was already revealed in 2018 by journalist Katarina Schickling in her impressive documentary The madness surrounding wheat – the fatal consequences of our agricultural policy. In her film, she lets German wheat producers and exporters as well as family farmers in Senegal have their say. She tries to get answers from the EU and the German Federal Ministry of Agriculture – with sobering results – and speaks to gebana CEO Adrian Wiedmer.

The documentary is in German; subtitles can be displayed in the required language.

Beyond chicken parts: What is keeping Africa's agricultural products from being competitive https://www.welthungerhilfe.de/welternaehrung/rubriken/entwicklungspolitik-agenda-2030/wettbewerbsnachteile-afrikanischer-agrarprodukte/ (accessed on 08/12/2021)